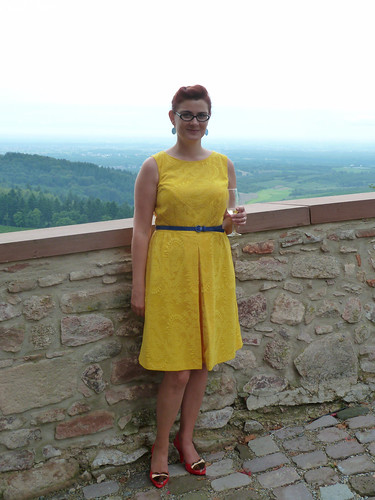 We went to a wedding at the end of July, and of course I wanted to make a dress to wear. I'd planned a second entry into the Vintage Pattern Pledge with a lovely dress with a draped bodice in feather print silk crepe lined with rayon challis. Yeah, well life got in the way and time ran out to make that. I had a back up plan of a RTW dress, but the day before we left I got a sudden inspiration and decided I was going to make a dress after all. As you do.

I went with the same pattern as my blue linen dress and my Sew Dolly Clackett dress, vintage Simplicity 5237 as I knew how it fit and could make it without doing a muslin first. Although having looked at these pictures I think the fit needs some work. Given I've already made this twice, there's more an emphasis on pictures than words in this post.

I used a yellow cotton twill, with a yellow lace overlay. Yeah, I like making things easy for myself... To make it even easier I tried to match the pattern - and actually did amazingly well given it was done by a wing and a prayer. The lace overlay does pull a bit giving the dress some odd wrinkles, I think because it's not entirely true to grain (it's just a cheapy nylon lace). I used the lace in different directions on the bodice and skirt as I thought it would give a nice effect, but it's actually not hugely noticeable in the finished garment. 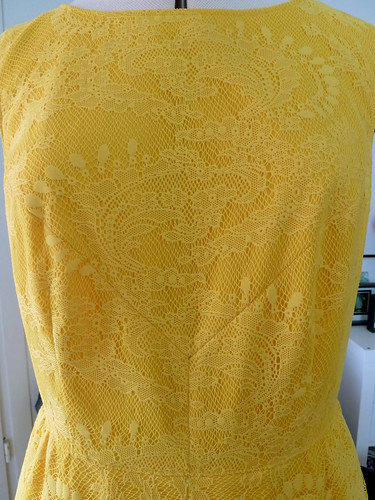 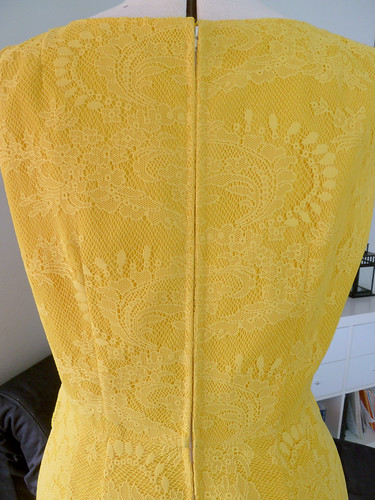 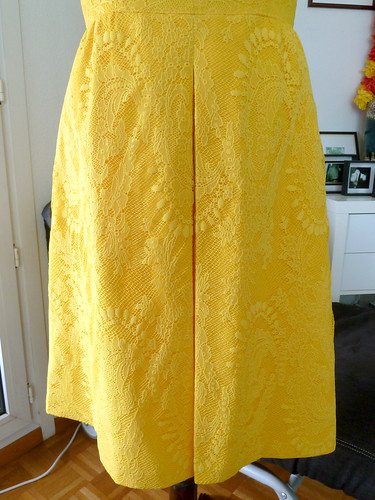 To save a bit of time I machine basted the two layers together on each piece. It would have been even quicker if I'd thought to keep the basting in the seam allowances as I wouldn't have had to unpick it all... I used a centred zip, but hand-picked it, and added a hook and eye at the top. The neckline and armholes were finished with pre-made bias tape and topstitching, and I also topstitched along the centre front pleat line to keep the two layers together. It's sort of pulling a bit weird though, so I might add topstitching along the inside pleat line too. I matched the pattern along the pleat as if it were shut, but whilst wearing it and realising the pleat is open most of the time, I should have maybe matched it along the seam instead. The insides and the hand-stitching aren't exactly beautiful, but it was functional and looked fine from the outside! 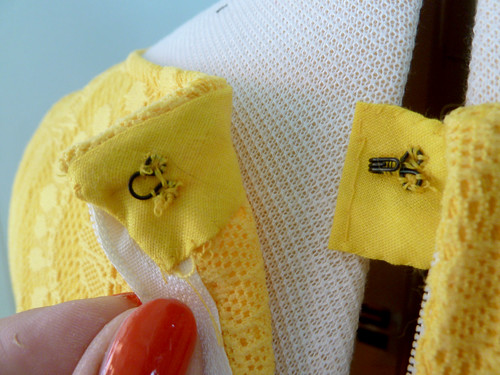 It's interesting how different something can look in your head/the mirror, and in pictures - I was really really pleased with the fit and thought it was super flattering, but then I saw the photos and was horrified! There's something odd happening between my waist and the bust, and also the armscyes are too high, causing funny wrinkles. The bodice is probably too large between the bust and waist too and maybe a smidgen too long, plus the neckline needs adjusting. Apart from that, it's fine! No, to be serious, most of these alterations should be fairly straightforward, and it's a dress I can see myself wearing again. I think also the photos don't look great as I did my hair and makeup in a rush as I was a bit hungover that morning (all the wedding guests had gone to a local wine Keller festival the night before...) 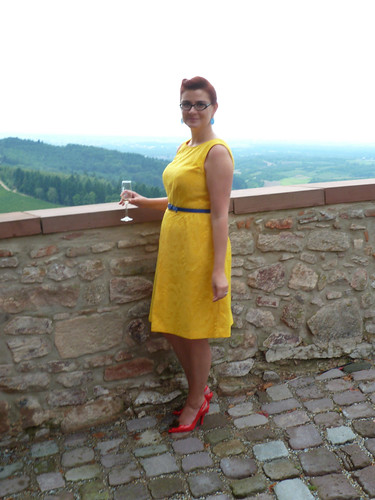 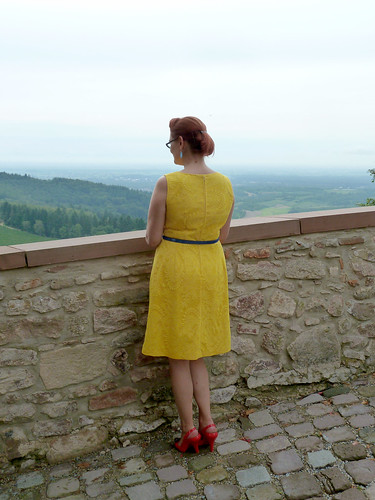 Despite the fitting issues, I count this dress as a success, and I'm super proud at how quickly I made this (whilst also fitting in packing!) - I started at 1pm on the Thursday and finished all the machine sewing by 1am that night. There was some intense hand-sewing done on the train, but I still had time for a nap :) 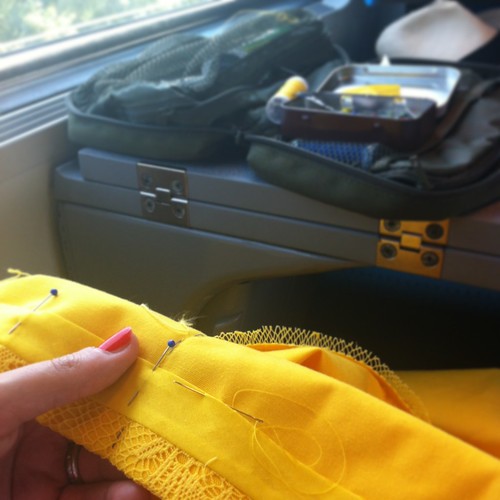 I'm not counting this as one of my Vintage Pattern Pledge makes as it's something I've made twice already! Still a couple of months to get these in though... I'll leave you with a couple more pictures of the dress in action. 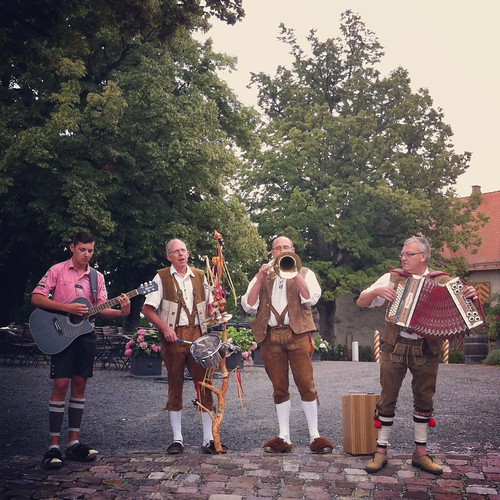 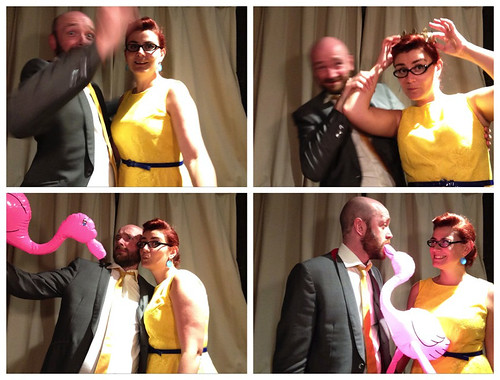 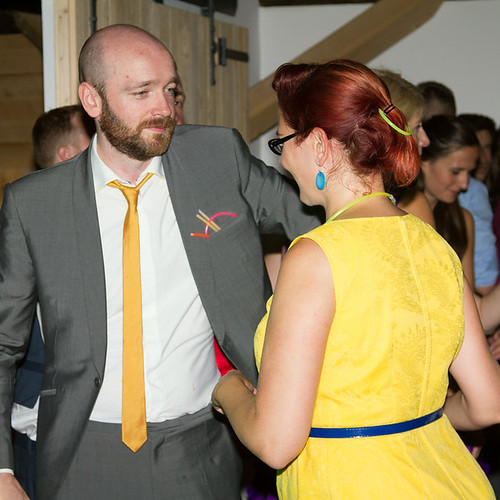 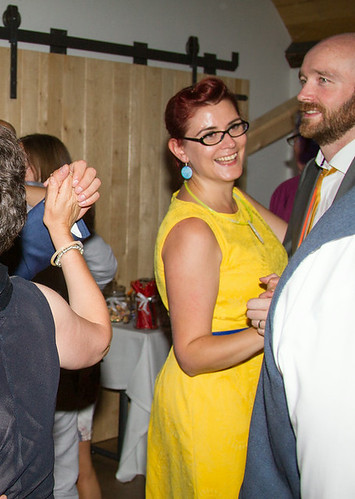 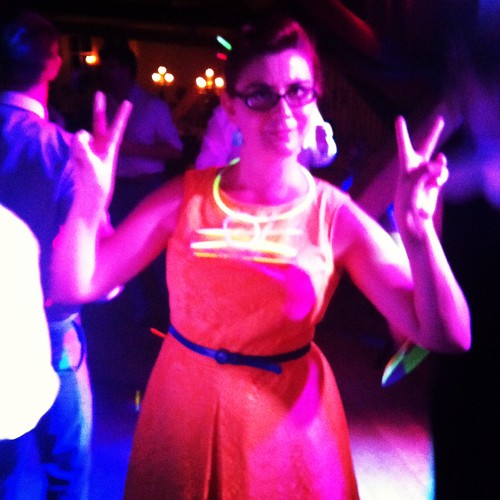 Email ThisBlogThis!Share to TwitterShare to FacebookShare to Pinterest
This post is about: clothes I've made, Dilly outfits, vintage, Vintage Sewing Pattern Pledge